V. S. Antonov International Competition of Young Woodwind Instrument Performers is held under the patronage of the Ministry of Culture of Ukraine, Kyiv Institute of Music named after R.M. Glier, where for many years Vladimir Antonov worked and educated a lot of talented musicians.
In May 2011 the first similar competition was successfully held. It had Ukrainian coverage and became a real cultural event in music society of Ukraine. About 100 young clarinet, flute, oboe, bassoon and saxophone players took part in the competition.
The musicians from different regions of the country showed an exceptionally high performing art which became an incentive for the organization of the competition on the international level.
During four days the contestants that had come to the capital from different parts of Ukraine competed for prize places in two age groups (14-19 years and 20-25 years) and in five instrument specializations (flute, clarinet, oboe, bassoon and saxophone). In spite of the fact that the competition was held for the first time rather serious rivalries were noticed between its participants. For becoming a winner young musicians had to show a very high level of performing art.

The jury consisted of its head – the president of Kyiv Institute of Music named after R.M. Glier Alexander Zlotnik, leading figures of national woodwind performing art and famous teachers.

In 2013 the 1st V.S. Antonov International Competition of Woodwind Instrument Performers was successfully held (flute and clarinet nominations). About 90 applications from candidates from different countries were sent for participation in the contest. 40 musicians from 9 countries were selected. They had a chance to get the right to become the best in the categories Clarinet and Flute. 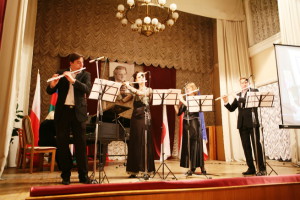 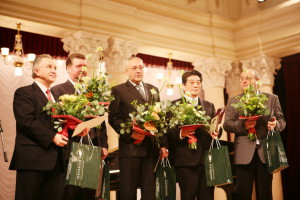 The masters of world music art from Ukraine, Japan, Russia and Israel judged the participants. The competition had 4 rounds: the elimination round (documents and video were considered); I and II round – performance with solo program; III round – participants were accompanied by the Academic Symphonic Orchestra of the National Philharmonic of Ukraine “Kyiv Camerata”.
The final concert and award ceremony of the competition winners were held at the The National Philharmonic of Ukraine.